The post-modern Prometheus and the monsters of the social media era. By Joshua Olsthoorn from Typical Organization

One could wonder why this odd Gothic horror fiction written by Mary Shelley published under the title ‘Frankenstein; or, The Modern Prometheus’ is of such timeless source of inspiration? Probably it’s the highly archetypical aspect of the novel that calls us again an again to use its substance to think. Perhaps this substance could be considered as fundamentally related to the modern or as Bruno Latour reflects on the story: ‘Written at the dawn of the great technological revolutions’.(1) 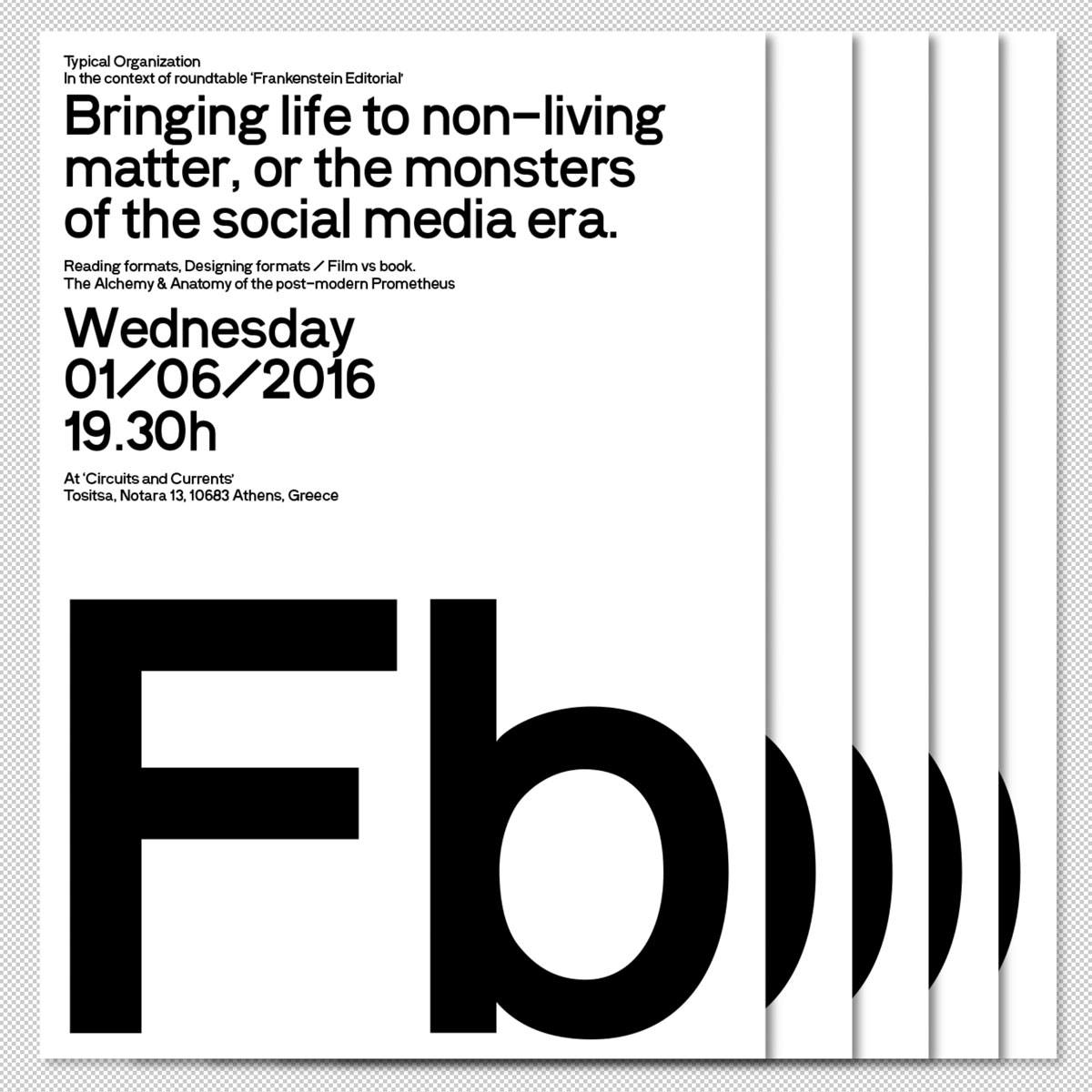 In the context of the Frankenstein editorial table round, our intervention started off by layering Shellys novel, published in 1818, with the first 16 minutes long cinematographic adaptation by the Edison Studios in 1910. Interesting in this short film is that doctor Frankenstein chemically create his living creature in a vat. This seems in our perception to make a clear allusion towards the development process of motion pictures itself, invented a few decades before. Is it not also the chemical process of film development that does use laboratories, controlled environments for experimentation and creation of animated life? The depiction of Frankenstein’s cabinet in Edison’s film seems to be done in the alchemist tradition showcasing a collection of obscure objects and tools. Most probably this atmosphere of experimentation surrounding the alchemists and early scientists busy with their ‘Theatrum chemicum’ inspired Mary Shelley herself by setting her horror story. Besides the chemical similarities between the processes, those theaters of transmutation could as well be compered with film studios, imitating or recreating life. And finally of course interconnecting various distinct body parts in to one living creature also can only remind us cinematographic montage. Within the montage rooms throughout the 20th century human life has been intensively cut in pieces and stitched together producing a vast cinematic army of lost monsters. In this perspective we could consider the Frankenstein myth a cinematographic one ‘par excellence’. The nowadays still-growing list of filmic adaptations of the story is a not modest illustration of this free association.

Putting in parallel film and book formats could signify thinking about containers and contents. In this context we would not like to enter in the debate of the differences between how narratives could be expressed in those distinct formats. Neither to prove that one stands above the other. Much more we would like to reflect on similarities and logics that connect the formats in their creation process. Considering for example that it’s possible to layout a film and that a book montage is a natural phenomenon. Or that one is flipping through a film or forwarding through a book. Typical dialectical concerns in cinematic montage, like passing between two shots creating a third instance, could be easily used in the montage of the pages of a book. But lets question this parallel in a reversed way by a statement: Film existed before book. To make such idiotic point de départ reliable we have to uncover the medium film from its technological progressive aura. Lets go back to a forgotten format that we could materialistically define as the earliest film: The scroll. This outdated long forgotten format known for having recorded the most ancient literate cultures, this roll created from skin or papyrus does make us think that film and book already coexisted in unity. This rapprochement makes even more sense nowadays, in our after Internet culture existence, where the term ‘scrolling’ has gained a renewed signification. History repeats itself and it seems that the verb, reintroduced in 1971 in the computing context (2), is streamlining the human perception accordingly to a dusty model. We scroll, or we roll towards a new Babylon. This old-new way of reading or viewing is exactly evoking, connecting or simply blurring formats. Who is not scrolling through films? Who is not scrolling through books? Of course we should make an in depth analyses about the scrolling direction and hierarchy, but we could also cut it short and presume that the logic left-right-up-down is finally the only grip in an endless landscape of textual, audio and visual substance. The scrollers of the future would not respect pre-designed beginnings and endings only the ‘autonomous’ format of perception would determine an itinerary. While speaking of users, readers or spectators we just think of the other side of the same story: designers, directors, writers or other Frankensteins also infected by this ongoing institutionalization of the blurring formats. Perhaps they did secretly or openly already dream of this absolute multi-media creation that has various names: “creature”, “fiend”, “spectre”, “the demon”, “wretch”, “devil”, “thing”, “being”, and “ogre”. (03) All those bodies in-formation, or should we say: all those lost bodies of ex-formation? Constitute, as we know, bigger corpses, we could call them the electric bodies of the social medias, continuously erected by masses of sinning Frankenstein doctors creatively experimenting in their portable labs to realize their vicious dreams. A suitable quote in this context by David Cronenberg: ‘Everybody’s a mad scientist, and life is their lab. We’re all trying to experiment to find a way to live, to solve problems, to fend off madness and chaos.’

Despite the perhaps confortable and convincing unifying theory of new blurriness, we are always dealing with the to us returning older confirmed formats. The reestablishment of the scroll is a striking example. No matter in which dimension the book or the film format would evolve there is ‘that something’ in our minds that calls us back to the older presumed original formats. This anxiety of being called back be earlier created demons could make us move forward faster or instead returning to dialogue with what we consider archetypical or original. One example in this register could be our relation with the screen as surface. Even that we have reduced the film screen to a pocked format we still, by watching a film, automatically resituate our self in a classic cinema experience. And how strange is it that ipad readers still turn pages? It appears that we are in need of our monsters of the past even if they are far from perfect. There heavy monstrous aspects are leaning on our newborn babies.

In the same earlier quoted article from Brono Latour he reminds us that we should not confuse the monster with its creator. Arguing that its not a sin having created technologies but rather is it a sin abandoning them. As creators we should care and love our creations since, out of a political ecological point of view, the creator and the creation are one. This Failure to take responsibility for one’s own creation is leaving dangerous entities haunting our lives. The illusion of the post modern Pro-metheus (forethinker) is that he believes to be disconnected from his twin brother Epi-metheus (afterthinker) representing nature in the sense of materialism.

Typical lecture in context of Frankenstein Editorial 01/06/2016 19.30h at Circuits and Currents — Thanks to Vassiliki Maria Plavou for her kind invitation.